The streets Southern and Northern 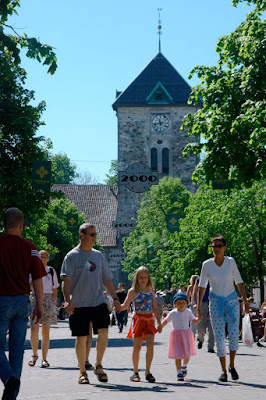 East of the Munkegata we find the streets Søndre (”Southern”) and Nordre (“Northern”). They have had these names since 1681. These are two parallel streets today both going from north to south. The streets differ a bit, though. It is like Nordre starts in the south, by the Church of Our Lady. Nordre is today a pedestrian street, filled with shops, and is the street we all walk along to see and be seen in the city. Søndre is a trafficked street. It is as if it begins by the railway station passed the channel in the north and ends by the building of the old fire department in the south. The architecture along this street is massive and impressive and in the street we find big restaurants and banks. The Søndre we visit if our business is serious. And so we are reminded of a distinction, namely the distinction between the serious and the light, between sobriety and frivolity. We are reminded of the distinction between heart and mind, and we may grasp there in life in fact is a fundamental distinction, the one between God and man, heaven and earth, man and woman, illustrated in numerous ways in the world. And we may reflect upon the relationship of the two.

The photo is taken at the top of Nordre, with The Church of Our Lady in the background.
By Vaksinius
Newer Post Older Post Home