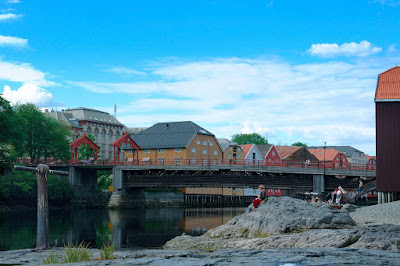 What unites the city centre and the central realm is the old city bridge, called Bybroen. The bridge originates from 1681, when the city was rebuild after the great fire, and the bridge over the river Nidelva was then put here for military reasons. Earlier the bridge over Nidelva was placed further west. In 1681 there was a military control post on the western side of the bridge, and this was one of the city gates. The look of today, though, being the bridge with the portals, is from 1861. At that time the bridge was built so that it could be elevated. In the 20th century the construction was made to be of concrete.

The Bybroen is made famous by a song, a waltz, of Oscar Hoddø. In the very popular song he referred to the bridge as the portal of luck and of happiness. The song is melancholic, written just after the German invasion in 1940, and was very important to the generation of that time: At least the bridge was intact.

I have taken the liberty to change the meaning of the text of the song by making it English and taking it out of context. In my words it goes as follows:


JEALOUSY QUIET AND GRACEFUL THOU ART

Original title: Nidelven stille og vakker du er
Original text: Oscar Hoddø
Changed and made English: Anders Woje Ellingsen
Melody: Christian Christensen and Kjell Rian
Growing from mountains far off in the blue,
trusted, a place to me dear.
Hither my thoughts and my dreams will ensue
after the taking of care.

Jealousy, quiet and graceful thou art,
here as I walk by, dreaming,
thinking of thee once so urgent to heart,
memories now just gleaming.

The old town bridge by the portal pulsar –
coupled and shining in stardom we are.
Jealousy, quiet and graceful thou art,
here as I walk by, dreaming.