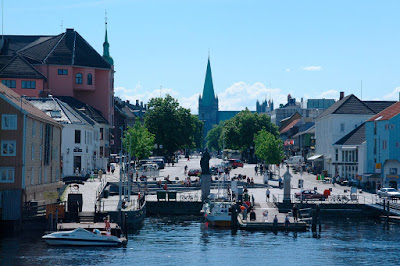 In the photograph we see the street Munkegata ("The Monks’ Street"), starting by the channel in the north and ending up by the cathedral in the south. The harbour by the channel is called Ravnkloa ("The Raven’s Claw").

Munkegata is the main street of Trondheim. It is far from being the most trafficked street, but most institutions of importance are located here. The street is divided like a spear or a sceptre, with the harbour at the bottom of the street, the town square in the middle of the street giving authority to the length of it, and the national cathedral at the top as the spear head. And so the street reminds of The Trinity of The Father (the harbour), The Son (the cathedral) and The Holy Spirit (the street as such). Historically the harbour was the main entrance to the city. Transport took place by the sea.

The name of the harbour, Ravnkloa, meaning “The Raven’s Claw”, is biblical. Raven like birds, like craws, hawks, eagles and vultures, give life to other beings the way they feed upon carcasses. They transform the kill, they transform the being come to its death, to a higher being by justifying it. Jesus told us, when he said, speaking of the end times, that wherever the carcase is, there the eagles will be gathered. The eagle has thus been looked upon as a symbol of nobility. When the harbour is called “The Raven’s Claw” this must have to do with the fortune of the fishermen putting their lives on stake on the sea for the benefit of the people, selling the fish at the harbour, damned by their heroic act, possibly gaining nobility, or rather welfare, by their work. Or the name originates from the feeling people in general had when entering the city at the harbour. The city was the site of possibilities.

The harbour is where life starts – where the seed is sown. The harbour is like The Father. The cathedral is where life ends and principles arise – where the yield is produced. The cathedral is like The Son. And the street Munkegata as such, uniting the harbour and the cathedral, is like The Holy Spirit. Along this street we find the royal residence in Trondheim, we find the court in Trondheim, and we find the administration of the municipality. Earlier we also found the administration of the region, of the county, here, and we found the military headquarter of the district here. The oldest high school in Trondheim, and possibly in Norway, is also located here. Munkegata is the street of authority, is the main street, of Trondheim.
By Vaksinius
Newer Post Older Post Home