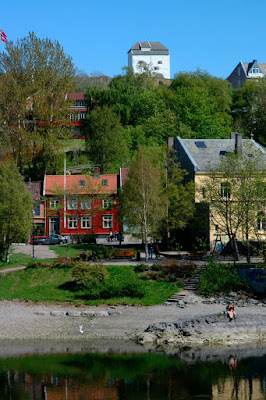 Up hills from the Bakklandet, on a brink controlling the city, we find the fortress Kristiansten festning. The man's, the king's, name "Kristian" means “Christian", and so "Kristiansten" means "Christian Stone”. And speaking of what really is important to defend in Christian faith we of course come to the conclusion faith itself is. Faith makes us independent. And what really shows faith is the child. Jesus pointed this out to us, saying that for him who made a child fall from innocence and faith, for him it was better if a millstone was hanged around his neck and he was drowned in the depth of a sea. And Jesus told us to be like children again. The kingdom of Heaven belongs to those who do. Faith, as the readiness of innocence, is the corner stone of what Christian is. And the fortress Kristiansten festning is a symbol of independence. We may build spiritual fortresses to defend faith.

Kindly let the fortress symbolize the girl, as such, that is, the daughter in the family, the muse, in the creative man, and the tension, in the world.

On the fortress today salute guns are placed. The fortress is a peaceful spot and as such a recreational area for both citizens and tourists.
By Vaksinius
Newer Post Older Post Home