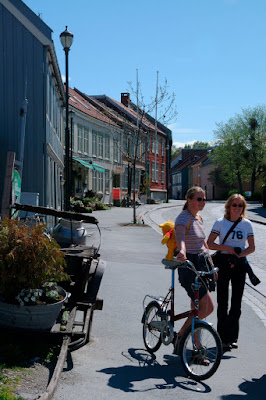 East of the city centre, on the east side of the Nidelva river, we find the area Bakklandet (“The Land of Hills”). This is the realm of the city. Historically the Bakklandet has been inhabited by the labour force. And by Bakklandet we may make a distinction between the stomach and the hooves of the city, thinking of it as a creature, where the centre is the working hooves and the Bakklandet is the digesting stomach. Moses told us, in The Law, that when justifying creatures by eating them we should make two demands. The hooves of the animal must be completely split. And the animal must chew the cud. Speaking of split hooves there in the city centre of Trondheim is a clear distinction between the Munkegata and the streets Søndre and Nordre. Two principles are illustrated, and speaking of the execution of power, there is an obvious division between the two principles. Bakklandet, on the other hand, illustrates the stomach. And the animal should chew the cud. And in fact there on Bakklandet is a higher level area, called Møllenberg (“The Hill With The Mill”). This higher level of the realm of the city traditionally has been inhabited by more powerful people. The houses here are more luxurious. And so it is like the cud is chewed by the two levels of the realm, and in this respect the name of Møllenberg (“The Hill With The Mill”) becomes symbolic.

Today the two levels of the realm are also united by a bicycle lift, called “Trampe” (the Norwegian word for what you do with your foot when you cycle up hills, or when you walk heavily). The lift was the first of its kind in the world.

Today the area Bakklandet has been renovated. We find cafés here, and a walk in the area with the old buildings is very pleasant.
By Vaksinius
Newer Post Older Post Home