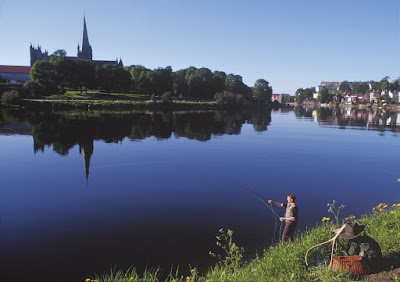 Trondheim lies on a sheltered peninsula on the southern shore of the deeply intended Trondheimsfjorden at the mouth of the river Nidelva in the middle of Norway. It was founded in 997 by king Olaf Tryggvason who build a royal residence by the outlet of the river. The residence was rebuild a few years later by king Olaf Haraldson, or Olaf the Holy, after a fire on the residence. Trondheim has been very central in the history of Norway. It was early made the capital city of the kingdom Norway. Kings have been crowned and blessed here, the church in Trondheim was a spiritual centre in Scandinavia especially from 1153 until the reformation in 1537, and the city is today the technological capital city of Norway. Trondheim is the third largest city in Norway. In 2011 it had 171 000 inhabitants. But since every sixth living in Trondheim is a student, the number of inhabitants is much larger.