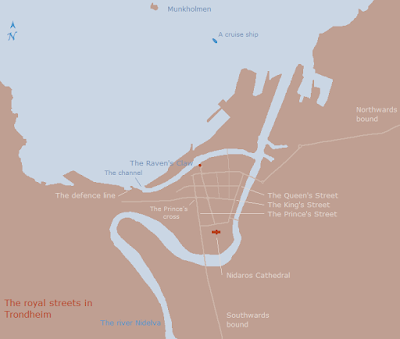 In the centre of Trondheim there are three streets given the names of the titles of the royal family. The Kongens gate, in English “The King’s Street”, goes from west to east and is the longest street in the city. It is the main entrance to the city from the west and begins by the ancient city gate and ends by the river Nidelva. North of The King’s Street and parallel to it The Queen’s Street goes. In Norwegian it is called Dronningens gate. It is not quite as long. In the city centre both streets are crossed by The Prince’s Street, in Norwegian Prinsens gate. The Prince’s Street is the main entrance from the south. It begins by the river Nidelva and ends by the channel. By the crossings we are reminded of the position of the son in the family, being his father’s faith and his mother’s hope. The son will excuse him being his intention and reveal her being her aim.

The crossing of The King’s Street and The Prince’s Street is called Prinsenkrysset, in English The Prince’s Crossing. This crossing is a symbol of Christianity, of belongingness to a family and of love to the son. A man principally thinking his son in every action will be reliable. A derision of faith was the establishment of the Gestapo headquarters in the Missionaries Hotel by The Prince’s Cross during World War II and the torture of patriots finding place here.
By Vaksinius
Newer Post Older Post Home