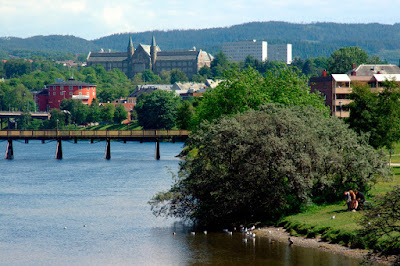 The photo is taken from the entrance to the city from the west and shows the old building of The Norwegian Institute of Technology on the other side of the river Nidelva. The red building is the Samfunnet, in English “The Society”, the meeting place for students.

Trondheim is said to be the technological capital city of Norway. And Trondheim is the prime seat of the Church of Norway. And so we are reminded of what seems to be a dilemma, between believing in technology and what the senses tell us or to be governed by faith. We are reminded of the conflict between the theory of the evolution and the Story of The Creation. In that respect we remember that the sisters Martha and Maria, both friends of Jesus, acted differently when Jesus visited them. Martha was occupied with making the meal and with making it cosy. But Maria just sat down by the feet of Messiah and listened to him speaking. When Martha complained about this, Jesus said to her that you, Martha, is cumbered with many things. But one thing is necessary. Maria, said Jesus, has chosen the good part, which shall not be taken away from her.

The Norwegian Institute of Technology was established in 1910 after the decision to place a national college of technology in Trondheim was made by the Parliament in 1900. From the college were graduated charted engineers (master level) and charted architects. The college was united with the university of Trondheim in 1995, but the importance of the college is verified by the fact the new university was called the Norwegian University of Science And Technology. Charted engineer students had a prominent place in the hearts and minds of the people of Trondheim in the 20th century.
By Vaksinius
Newer Post Older Post Home