The crown jewels are to be found in the old arch bishop residence situated by the Nidarose cathedral. The exhibition is open to the public. The pictures here presented I once downloaded from the internet sites of His Majesty the King. 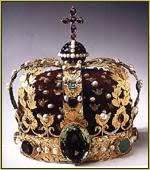 The crown is the status symbol of the King. It symbolises the fact the people has crowned the majesty to be the one expressing Norwegian spirit as such. In his name we will live and act.

But the majesty in Norway is dependent upon the constitution. It was not the Majesty who declared the constitution. He was elected. The constitution of Norway is of 1814 and we celebrate it May the 17th. Before that time, Norway belonged to Denmark, but as an agreement of the Kiel treaty in 1813 after the First Napoleon War, Norway was given to Sweden. The Norwegian governor, the Danish Prince Cristian Frederik, would not accept this. He let the Norwegians call in an assembly of elected men from the churches and from the military, which formed a constitution and elected Prince Christian Frederik as the King of Norway. Then followed a brief war with Sweden, which ended when King Christian Frederik resigned. But Norway was not conquered by Sweden. The Parliament of Norway elected the Swedish king as the Norwegian king also, answering to the Norwegian constitution, and so we were in union with Sweden from 1814 to 1905. In 1905 Norway was detached from Sweden by a decision of the parliament. And Norway chose the Danish Prince Haakon to be our new king. The decision of the Parliament to choose Haakon was sanctioned by a plebiscite. The King of Norway has since 1905 been of the family of King Haakon. 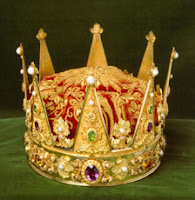 The symbol of the udal principle is illustrated by a crown for the crown prince. The principle was formulated in the Constitution of 1814. The principle says man should have his son in mind as his successor. The son should inherit his property. The son is love afforded, as differently from the daughter who is conscience afforded.

Unfortunately udal rights were abandoned in Norway in 1974, exchanged with allodial rights were daughters are treated the same way as sons. From 1990 of, first born offspring will inherit the throne whether the offspring is a prince or a princess. 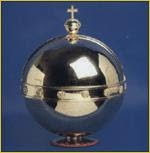 The symbol of the supremacy of the majesty is a small globe in gold, called “the national apple”. The globe is a symbol the majesty has been relieved from the duties of citizens and inhabitants by being the ruler. He does not stand under the law. He can not be arrested or imprisoned or be subjected to legal proceedings whatever he does. It is he who makes the law and he stands above the law. This principle is written in the Constitution. 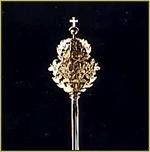 The sceptre is the symbol of power (in Norwegian “makt”) as different from the symbol of authority, which is the sword. By the sceptre, or the spear, the Trinity is illustrated by the stake bottom, by the rod as such and by the spear-head, and the sceptre is a symbol the King expresses the power of God. The Majesty is responsible to God by making the power of God valid. By the Majesty God will work in the world as preponderance. 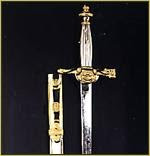 The sword is the symbol of authority (in Norwegian “myndighet”) where the spear is the symbol of power. By the sword a dualism is illustrated, and the one being subjected to the handling of the sword will be banned. The Majesty is reliable to God by making the authority of God valid. He shows what the power of God means by his jurisdiction.

The stylish flower in the heading is
Olavsrosa, that is, the rose of
the ancient king named Olav the Holy,
being a sign of the municipality.
This site:
x9.trixnix.com
Please, also see
trondheim.prixnix.com.
Vaccinius · Sigruns Sang

See my explanation | here |.
Vaccinius
The site is powered by