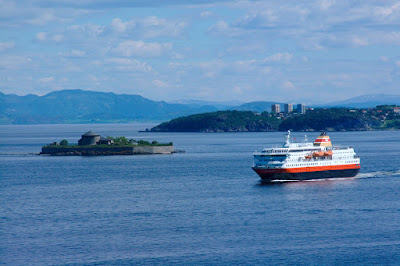 Trondheim is situated by the fjord. And by the fjord there is a channel, beginning by the ancient gate of the west and ending by the Nidelva river in the east. The place where the channel begins is called Skansen, meaning “The Defence Line”. Here one controlled the entrance to the city from the sea.

Trondheim is known for its fjord. The fjords make us special, in Norway. If the sea is our feelings and the land is our consciousness, it is like the feelings have made attacks on the consciousness by the fjords. And the consciousness has let the feelings do so. Fjords are established as symbols of marriage. But the fjord is to be grasped also in another sense. In the story of the creation a clear distinction is made between necessity, usefulness and loveliness. The plants are of three kinds, being corn, herbs and fruit trees. The plants symbolize values. The animals on the ground are of three kinds, being creep, cattle and wild animals. The animals symbolize sensibility. And there are three kinds of light on the ceiling, being the moon, the stars and the sun. The lights symbolize spiritual enlightenment. And in Norway there are three kinds of water. There are the ocean, the fjords and the lakes. There are faith, hope and charity. Only the pure watered lakes are true charity. But the fjord is to have expectations to. It seems like it wants to be a lake, exactly the same way as cattle seems to want to be wild animals.

The Trondheimsfjord is 130 km long. It is an inlet of the Norwegian Sea. At least 90 species of fish has been observed in the fjord, and the fjord has the richest biological life of all Norwegian fjords. It was an important waterway in the Viking age, and it still is. The ware houses by the river Nidelva give witness to the historically importance of the fjord.
By Vaksinius
Newer Post Older Post Home